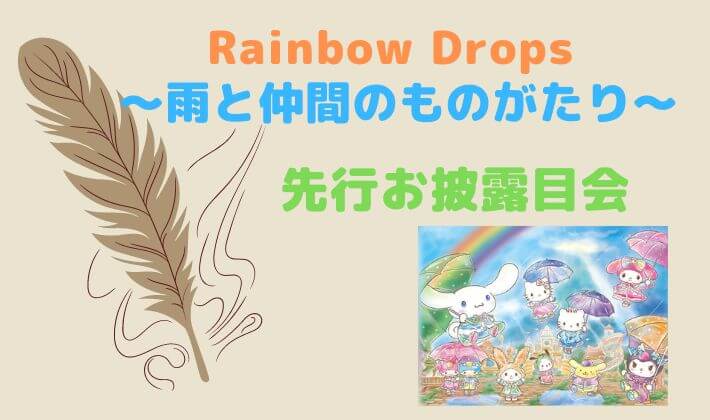 On May 19, 2022, I participated in the advance unveiling of “Rainbow Drops – The Story of Rain and Friends -“. Rainbow Drops will be the new parade at Puroland. I was very excited about it as soon as it was announced, so I was very happy to be able to participate in the unveiling. I would like to write a report with those feelings.

About “Rainbow Drops – The Story of Rain and Friends -“

A new parade at Puroland “Rainbow Drops – The Story of Rain and Friends -” began on Saturday, May 21, 2022. It is a paid parade with all seats reserved. Please check the performance schedule of that parade here.

Since the parade is staged after closing, there is a separate ticket fee in addition to the admission fee. The fee schedule is as follows

Tickets with novelty (purchased in advance at Lawson Ticket)

Novelties for other seats

Tickets without novelty (purchased on the day at Puroland)

Kerokero Keroppi and supporting characters (which change daily) will appear before the show. (At the unveiling on the 19th, it was Monkichi.)

Now that you have an overview of Rainbow Drops, I will write about my impressions of the unveiling. 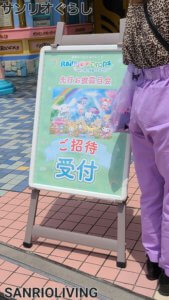 First, I had to register before entering Puroland. This time, 145 groups of 290 people, selected by lottery from among the Puroambassadors, participated.

I received a novelty and a seating chart after checking our “Puro Puroambassador’s membership card” and “ID card.” This time my seat was in front of the Discovery Theater. 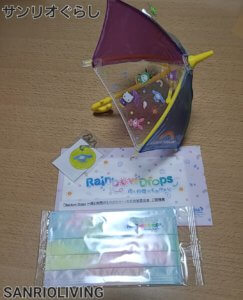 I received these novelties. Thank you very much.

It may be a coincidence, but the character on the charm was my favorite, Cinnamon. 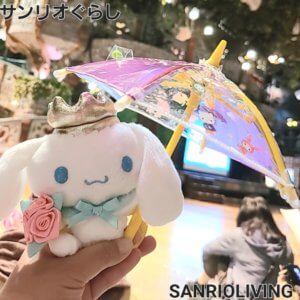 The miniature umbrellas are quite cute in plush size. It will be fun to take pictures with plush toys.

While I was checking novelties and taking plush pictures, today’s MC, the weather girl, Kerokero Keroppi, and Monkichi appeared. 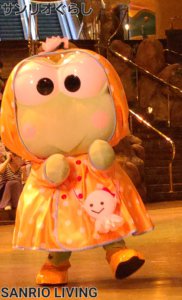 Participants practice dancing with MC, Keroppi and Monkkin while watching the video on the screen.

The dances are so simple that even young children will be able to learn them quickly.

As preparations are completed and darkness falls, the sound of rain can be heard and the sky spirits appear.

In front of the Discovery Theater, the rain spirits begins with a dance.

Then Cinnamon appeared from the Tree of Wisdom stage. It seems that Cinnamon brought the spirits of the sky. And he also invited Puroland Friends.

A fun dance with the sky spirits and the Puro Friends begins. I think my favorite sky spirits is the wind spirits. The dance was very cool. 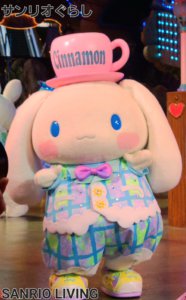 A fun dance with the sky spirits and the Puro Friends begins. I think my favorite sky spirits is the wind spirits. The dance was very cool.

In front of the Discovery Theater, the turn of the wind spirits, Kuromi and Daniel are dancing for them. It’s very cool. 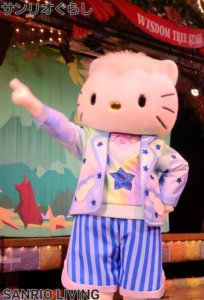 The characters go around the Tree of Wisdom, so it’s nice to see so many Puro Friends.

The other spirits begin to tease the rain spirits about their inability to use their powers properly yet.

Kuromi saw this and started saying, “Isn’t it too hot these days in summer!” which triggered a fight among the spirits who had become good friends.

The Tree of Wisdom catches fire because the spirits do not get along. To put out the fire, the spirits of rain is sacrificed.

The spirits are discouraged by the result of sacrificing the rain spirits due to their own inability to control their power.

The Puro Friends, who were watching, conveyed their thoughts to the spirits. 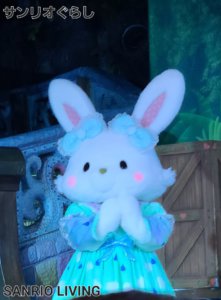 “It’s important that we appreciate each other.”

“Individuality is important, but it’s also important to appreciate each other’s individuality.” 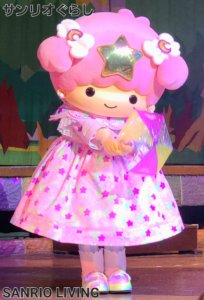 And finally, everyone dances together using “Umbrellan♪”.

Everyone will have a costume change and be in raincoat costumes. They are very cute. I want to wear the raincoats with the characters. Please make the big umbrella of “Umbrellan♪” into a product, too!

his time, as a Puroambassador, I wrote a report of my participation in the advance unveiling of “Rainbow Drops – The Story of Rain and Friends -“. Honestly, I want to see more of it! The story is very easy to understand and I want to go see it with my daughter too! Thank you for the invitation!