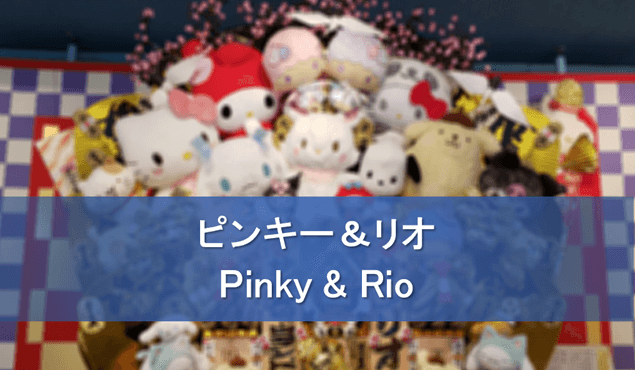 Pinky Lilrose & Rio Skypeace were on a TV show “Sanrio characters pon pon jump!” that aired from 2017 to 2020. Pinky is fashionable and cute. Rio is shy and a bit of a nerd. Let’s take a closer look at these two.

Let’s start with their profiles.

In fact, she is a rich young lady, but she has a backbone, a rich imagination and energy. She also has a sweet little demon side to her.
She’s dressed in pink all over, and even her magical parasol with a sheep motif is pink.Anyway, she is a pink sheep. The pink sheep girl, who loves pink, wearing pink clothes and holding a pink sheep parasol. In addition, her birthday, June 23rd, is National Pink Day. She’s truly a walking pink festival! No other Sanrio character is this pink-focused… oh… (My Melody…)

He is a little shy and easygoing, but he is very curious and observant. His investigative skills are superb.
He wears a pair of red glasses, but when he takes them off, he seems to be very handsome.Someone please recommend him to wear contact lenses. He is a blue bear guy in blue pants. Also, his birthday, May 1, is National Blue Day. But he still doesn’t have enough blue power compared to Pinky’s pink power, lol.

Places or content where you can meet the character
During the airing of that TV show “Sanrio Characters Pom Pom Jump!”, they would come to Sanrio Puroland. But we don’t seem to see them at Puroland these days. It would be nice if they would come out for more greetings at Puroland.

There is also a DVD of “Sanrio Characters Pom Pom Jump!” available for sale. It includes special features that your kids will love, so whether you’ve seen the show or not, you should check it out. My 2 years old daughter loves it too!

Children’s chopsticks and lunch cloths are available as lunch items. In addition to Pinky and Rio, Kitty, My Melody, and Bonbonribbon are also painted together, so you can enjoy lunch time with a variety of characters.

There are also sticker picture books, coloring books, etc. available, but as of August 2020, they are all sold out and cannot be ordered. Hopefully they will be re-released and stock will be restored.

Pinky’s voice actor is Kalin Isobe. She made her debut as a singer in the opening song of the TV anime “Go! Princess Precure” and is also active as a voice actor for anime and games, and as a stage actress. She is also famous as the voice actor of Tsukioka Kogane from the popular game Idolmaster Shiny Colors (Shanimas). She is also a member of the vocal and performance unit BlooDye, which was formed in 2019, where she sits on vocals with Kanako Takatsuki. Speaking of Kanako Takatsuki, she’s the voice actor for Kunikida Hanamaru, the school idol in “Love Live! Sunshine!!”.

Rio’s voice actor is Yoshihiko Aramaki. He is an actor mainly active on the stage and in musicals, appearing in so-called 2.5-dimensional musicals and stages such as “Toukenranbu”, “Musical: Prince of Tennis (known as TenniMu)”, and “MUSICAL NINTAMA RANTARO”. He played the role of “Sir”, an aspiring British aristocrat in the TV drama “TV Drama Success Sou”, and also played a host (not a nobleman) named Jukiya in another TV drama “Birth of an Aristocrat -PRINCE OF LEGEND-“, and later appeared in the movie “Aristocrat Descending -PRINCE OF LEGEND-“. I feel like Rio’s image is becoming more and more of a bear to an aristocrat, but don’t worry about it. Rio is just a shy, slightly nerdy bear who is handsome when he takes off his glasses.

Pinky & Rio were very active in the TV show “Sanrio characters pon pon jump!”. They’re both charming characters with strong personalities, and the people in them (the voice actors) are also incredibly unique. It’s a pity that we don’t get to see them more often after the show, but I hope they’ll continue to appear at Puroland’s meet-and-greet events and other places.