Your vote will make your favorite character #1! – 2020 Sanrio Character Ranking 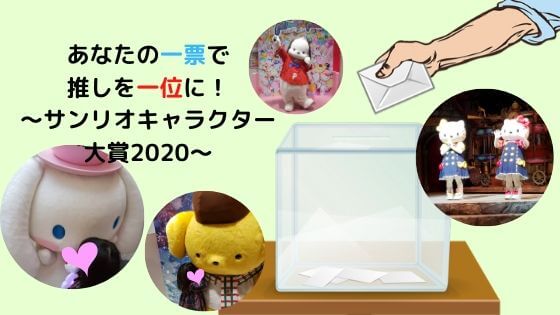 A hot fight has begun for Sanrio fans. It’s “Sanrio Character Ranking”. Vote every day and lead your favorite character to the grand prize….. It’s a tough fight.

My favorite character “Cinnamoroll” didn’t win the No.1 place last time, and didn’t win the Sanrio Character Ranking for the third consecutive time. (Kitty was strong…) I want him to come back in first place this year, so I’m working hard every day to vote for him.

The above questions are answered in this article.

What is the Sanrio Character Raking?

The Sanrio Character Grand Prix is an annual vote for Sanrio’s most popular characters on the monthly Strawberry News. This was started to cheer on our favorite characters.

When you hear about Sanrio’s popular character voting, you probably have an image of voting for one of your favorite characters. However, for the Sanrio Character Ranking, you can vote for any character you want, such as “the one you still love”, “the one you’ve always been with”, “the one you miss”, “the one you want to know more about”, etc.

And it doesn’t matter how many characters you vote for! In the extreme, you can even vote for all of the participating characters every day! There is also a collaboration section.

The Sanrio Character Ranking have a long history, starting in 1986 and marking its 35th anniversary this year! In the beginning, people were able to vote with a voting ticket attached to a Strawberry News.

In 2010, in addition to voting from the Strawberry News, voting began on the Web and in Sanrio shops.

Voting for 2020 began on April 10 in the Strawberry News, on the Web, and in Sanrio shops, etc.

There’s also a video about the Character Ranking on YouTube, so be sure to check it out!

How to Vote for the Sanrio Character Ranking

Now, you can’t participate if you don’t know how to vote. You can participate in the Ranking by voting in the Strawberry News, on the web, or at the Sanrio Shop. But that’s not all!

There are many other ways to vote this year, so I’ll be introducing them.

You will receive one voting chip for every 500 yen you spend at the Sanrio Shop with a purchase of 1,000 yen or more excluding tax. You will receive up to 20 voting chips. Put the chips into the character you want to vote for in the voting box located in the shop. You can see how many votes are getting in for which character.

One chip in the Sanrio Shop means you’ve voted for three votes! One tip given at the store will count as three votes at the time of counting.

Sanrio Character Ranking goods are also on sale, so be sure to shop at the Sanrio Shop to get tips and vote for charactets!

You can also vote using the “Sanrio Friendship Club Points” that you can earn at the Sanrio Shop, and you can get 2 voting chips for every 5 points, and you can exchange up to 50 points (20 chips).

In addition, for every 15 points exchanged, you will receive an original petit towel. It’s a limited edition petit towel with a total of 40 varieties.

That ballot can be filled out for up to five characters. Also, a vote for one character will count as two votes. However, you can’t fill in the same character twice.

You can cast your vote when you shop at the . Select the character you want to vote for from the banner on the purchase completion page and cast your vote.

You can only vote for one character per purchase, regardless of the purchase amount.

It seems that if the line is busy, you may not be able to access the banner on the purchase completion page. In that case, you can contact the Sanrio Online Shop and they may be able to vote. So if you don’t have access and can’t vote, please contact them.

Sanrio character pedometer is available for pre-order in collaboration with TANITA Corporation. There is a pedometer for all 80 characters.

For each one, 18 votes will be added to the purchased character. In addition, the character with the highest number of orders for the pedometer will receive a “TANITA Award” at the Sanrio Character Grand Ranking presentation. 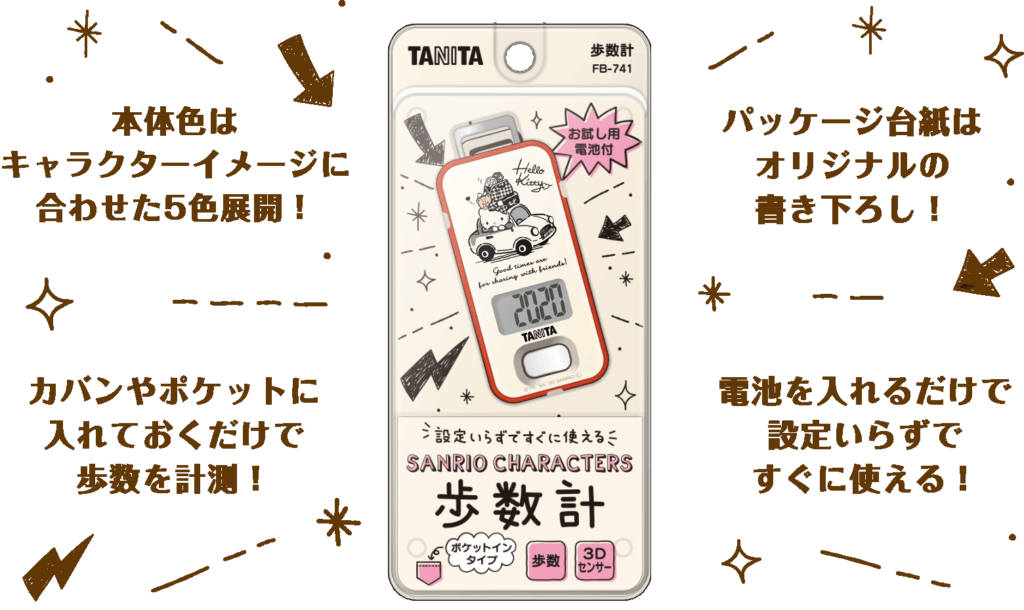 You can’t buy them at the Sanrio online shop, so make sure to pre-order them from the Tanita online shop. 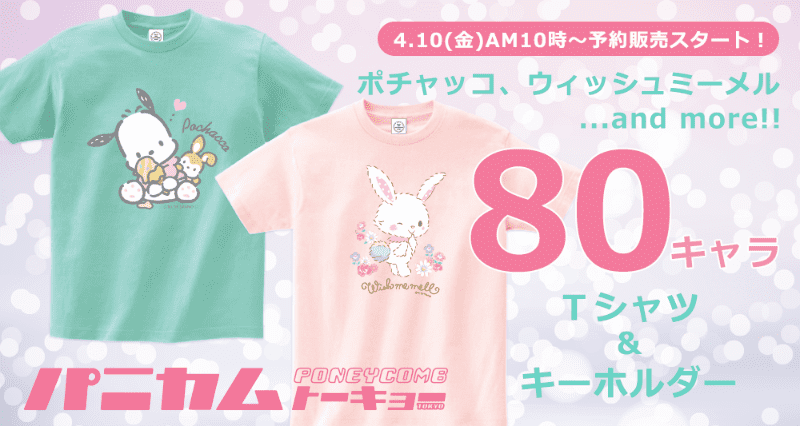 At PONEYCOME Tokyo, products linked to the Sanrio Character Ranking are being sold by order. This year, there will be t-shirts, key chains and handkerchief sets of all 80 characters entered into the competition, and every purchase will automatically earn 3 votes for each character you purchase.

Stamps of the entry character of the Character Ranking will be delivered on “docomo Sugotoku Content”, “au Smart Pass” and “App Pass”. Downloaded stamp characters are counted as one vote.

The campaign expires on May 25, 2020. If you’re a subscriber to a qualifying mobile site, you should definitely give it a try.

You can participate in the voting by staying at “Hotel Okinawa with Sanrio Characters” on Kokusai-dori in Naha City, Okinawa, or by using the cafes and shops in the hotel.

You will receive 5 tips (up to 15) for each person staying in a hotel room per night. You will also receive one chip (up to a maximum of 10 chips) for every 550 yen spent at cafes and shops for 1,110 yen or more. One chip counts as three votes. 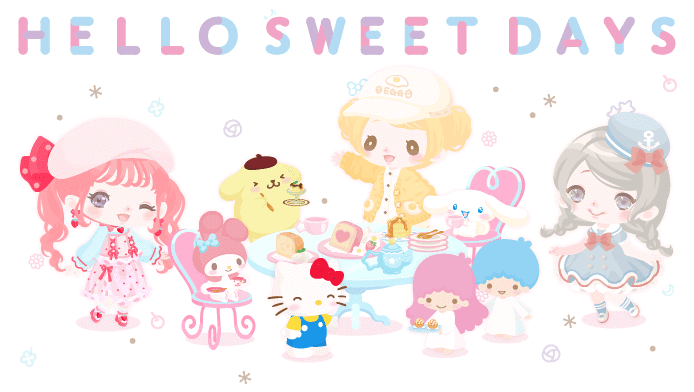 You can vote on the official Sanrio dress-up app “HELLO SWEET DAYS”. Just log in to the app and you’ll get one voting ticket a day for everyone without fail. Also, every time you use the Happy Back “7 times plus”, you can get 2 additional voting tickets as many times as you want.

Voting has started on “PIGG PARTY” and “PIGG LIFE”, smartphone apps by PIGG. You can participate in the voting by purchasing “Voting Cubes” that are sold in the app. In addition, the character with the highest number of votes in the PIGG will receive the “PIGG Award”, a special prize at the Sanrio Character Ranking.

Now that you know how to vote for the Sanrio Character Ranking, aren’t you curious about what characters make it to the top every year?

When it comes to Sanrio characters, Hello Kitty, so isn’t she the No.1 character every year?

I think a lot of people think so. However, the number of Sanrio characters is increasing day by day and there are more than 400 of them.

Let’s take a look at whether or not Hello Kitty is still at the top of the list every year.

As expected, the popularity of the Kitty is high, and it has been in the top places every year since 1995. Kitty is also the only one who has achieved the amazing feat of being number one for 12 years in a row. You can see that Kitty have always been popular.

My favorite “Cinnamoroll” appeared in 2001, and has been in the top rankings since 2003. He hasn’t been able to finish fifth several times in the past, but he’s been consistently ranked in the top three recently. He narrowly missed the No.1 last time (2019), but this year he is trying to get No.1!

Every year, many characters participate in the Sanrio Character Ranking, but there are some characters who are participating for the first time this year, so I will introduce them. 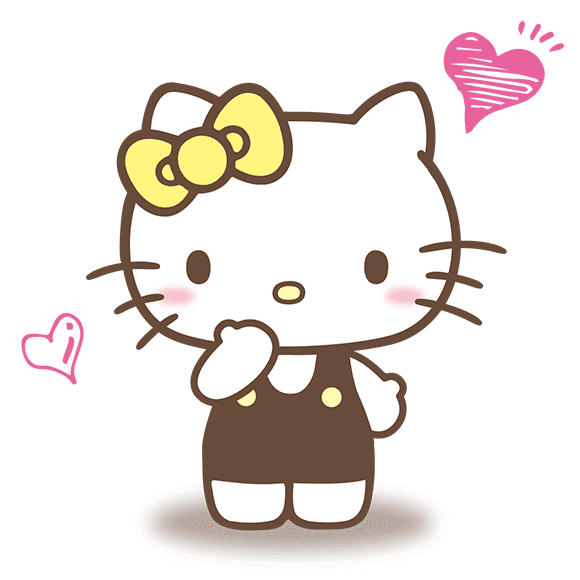 Mimmy, Kitty’s twin sister, will be participating in this event for the first time! I’m wondering why she hadn’t participated in until now.

Mimmy and Kitty are twins, so they look very much alike, but the one with the ribbon on the right ear is Mimmy. In contrast to Kitty, Mimmy’s character is very quiet.

Recently, Mimmy has been appearing on Kitty’s YouTube more often. There is also a video of Kitty and Mimmy trying to compete in M-1 that is a comedy competition for young comedy duo. 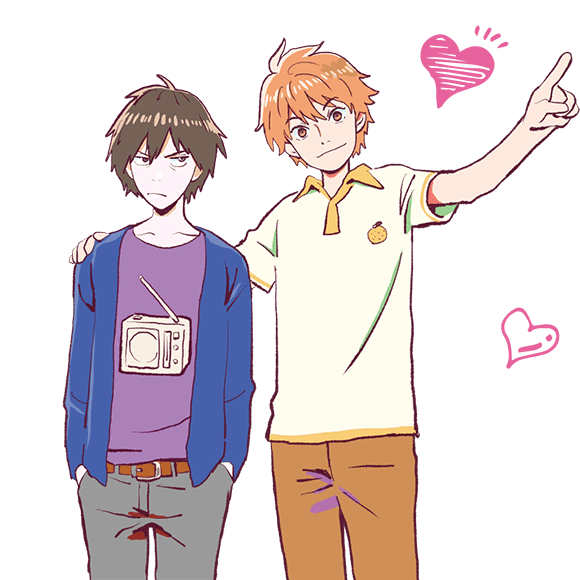 “Warahibi!” is a coming-of-age story about six young comedians belonging to the fictional comedy office “Warahibi Entertainment Office” who seek the moment when laughter rings out in the theater. It’s a next generation comedy/entertainment project that is bright, cute, Sanrio-like, and a little bit cool, and uses the small gift of laughter to create a big smile for everyone.

They only made their debut last year, but their work is focused on video, stage and books.

The people in this picture are Haruka Fukushi (on the left) and Jun Komine (on the right) of “Asayake Rangers”. There are many other comedians, so check them out.

Voting for the Sanrio Character Ranking began on April 10, 2020. Then on April 14, an Initial Results was released.

In addition, an Interim Results was made on May 12. Let’s see how it all came out.

The first place in both the Initial Results and the Interim Results was Cinnamoroll! He lost to Kitty last time, so it seems that everyone who loves Cinnamon is doing their best! I’m going to try my best to vote so that he can continue to keep the #1 spot.

I was surprised to see that Pochacco came in third place in the Initial Results. Last time he was 5th place, but this year it’s Pochacco’s birthday once every four years!! Pochacco ‘s birthday is on the 29th of February, so the leap year is celebrated with great fanfare. I think the ranking was also increased because there were plans to hold Pochacco ‘s birthday live in Puroland, and it was quite exciting.

This year, a male character unit called “Hapidanbui” appeared, and I think the members “Pochacco”, “Tuxedosam”, “Kerokerokeroppi”, and “BAD BADTZUMARU” have risen in the ranks. I predict that “Hangyodon” and “Pekkle” will also be higher than last year’s rankings.

In the Interim Results, YOSHIKITTY has been ranked. He has a deep-rooted popularity, so it looks like he’ll be in the top 10 this year.

It’s a smartphone-only application that asks “How many guesses can you make? Sanrio Ranking Predictions”, and if you win all the predictions from the 1st to 80th place, you will be able to get a superlative prize. I recommend that you give it a try.

When you go to the Sanrio shop, buy one and vote for your favorite character!

Here are a few of my recommendations. 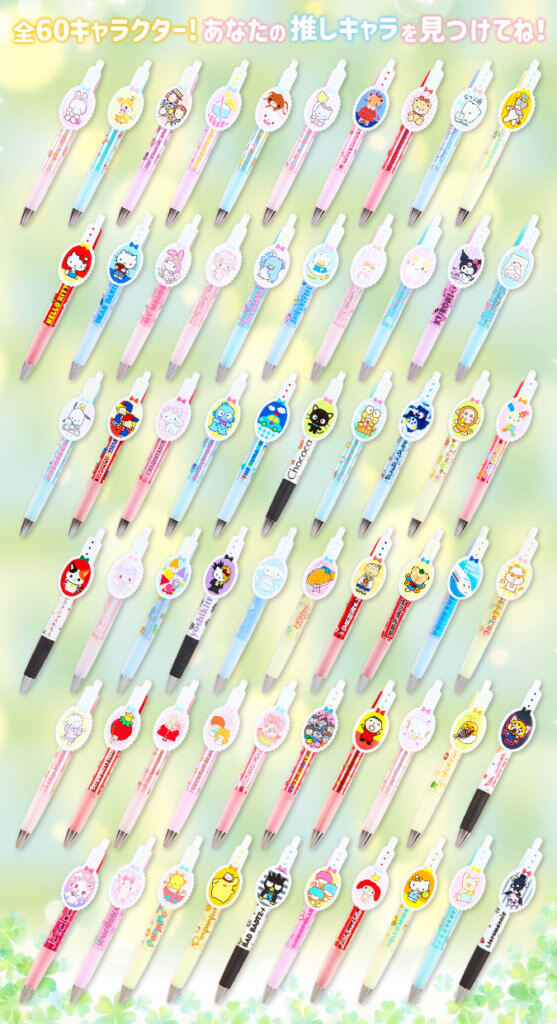 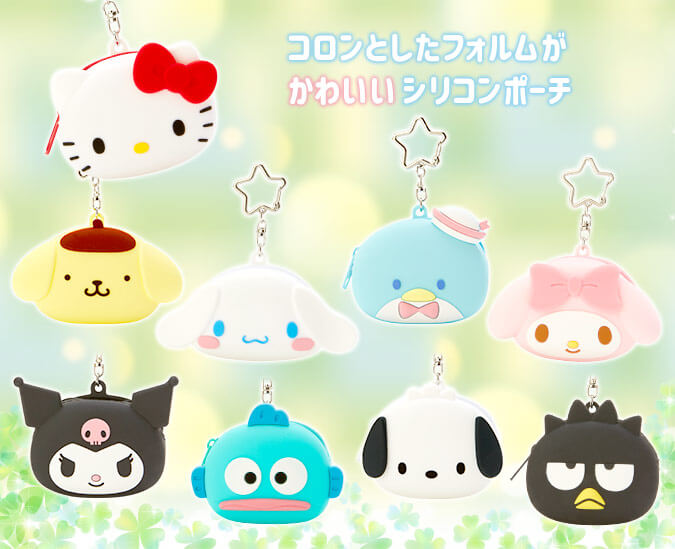 This is the only silicone mini pouch charm available for purchase in our online shop. The charm part is very cute with a star on it.

It was announced on June 9, 2020 at 12pm at Sanrio Puroland. It was lonely with no audience, but a lot of characters appeared in the show. The announcement was only 30 minutes long, so they started with the 15th place.

Now, I was thrilled and waiting for the top announcement. Here are the results! 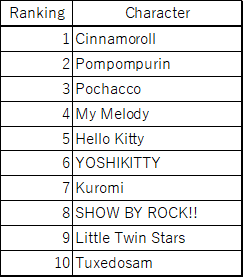 Cinnamoroll is back in first place! Thank you! I was really happy. This time I wasn’t able to go to the Sanrio shop because of the new coronavirus (COVID-19). I wanted to support Cinnamoroll more, but I couldn’t, and I spent my days frustrated. But I’m glad I did my best to vote online!

I really wanted to congratulate Cinnamoroll in person, but it looks like it’s not going to happen…

The announcement of this year’s Sanrio Character Ranking has been uploaded on YouTube. Please check it out! At the end of the announcement, the characters are dancing. They’re so cute!

This year’s Sanrio Character Ranking is also in high excitement, and my favorite Cinnamoroll got the first place on the Initial Results, Interim Results and Final Results! A lot of people vote every year, so I hope this will continue. Also, I hope a lot of people get to know a lot of the characters.